The Best Tour Guide May Be In Your Purse

The Best Tour Guide May Be In Your Purse

In Blog, News
By Sarah Pounders

We wanted to share this great article from the New York Times on Museums using mobile apps:

The Best Tour Guide May Be in Your Purse 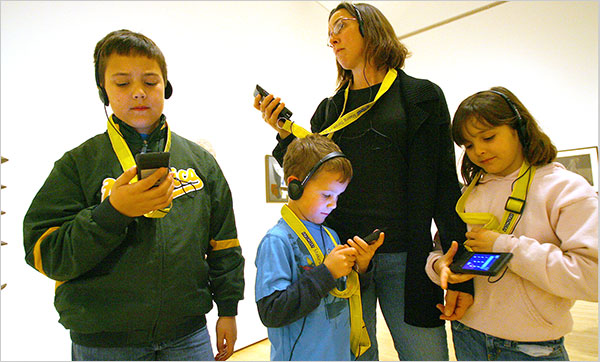 THE San Francisco Museum of Modern Art formally celebrated its 75th anniversary on Jan. 18 with an eye to attracting millennial generation multitaskers. The event included handing out to museumgoers iPod Touches loaded with a rich mix of pictures, interviews, video and graphics exploring 200 pieces in the institution’s permanent collection.

Like almost every major art museum in the country, according to communications officers here and in other cities,  the San Francisco institution is using mobile multimedia devices  —  iPods, iPhones, BlackBerrys and other smartphones  —  to tell the stories of its exhibits in new ways.

“Essentially, we’ve liberated the audio tour,” said Peter Samis, the San Francisco Museum of Modern Art’s associate curator of interpretation. “We’ve developed five hours of content, made it extremely portable and easy to use, and devoted it to rediscovering aspects of our collection and its history. This is not about techno-fetishism. It’s about focusing on artworks in meaningful sound and video.”

Art museums have always viewed communications as their primary mission. Never, though, have the editorial, design and production staffs of art museums been busier than they are now. Digitization has steadily brought down the cost of the software and tools of multimedia production  —  audio, video and interactive motion graphics. More powerful and available online access has made smartphones and other mobile devices ubiquitous and more useful.

Mr. Samis said his museum developed the content for the mobile tour with its own staff. Nousguide, a Vienna-based content management company, developed the presentation software. The intent is to marry the story behind a painting or piece of sculpture to the hand-held online and multimedia communications revolution. Last year, a survey by the Pew Internet and American Life Project predicted that by 2020 mobile devices would be the primary connection to the Internet for most people in the world.

Museum communications departments welcome the challenge. Since the 1960s, when tape recorders and audio tours were first introduced, art museums have embraced technology to provide more engaging ways for patrons to interact with exhibits. In 2002, art museums began delivering audio tours on cellphones. Later in the decade, interactive producers like Second Story, a Portland, Ore., design company, delivered  multimedia kiosks and online  programming to museums. In May 2008, the San Jose Museum of Art was one of the first to produce a mobile multimedia tour of its exhibit of the evolution of robots. Content was delivered on  the first-generation iPod Touch.

Art museums are putting mobile devices to use in creative ways. In Louisville, Ky., the 21c Museum, which describes itself as the only museum in the United States dedicated exclusively to displaying art made in the 21st century, in April will introduce an iPhone multimedia tour that takes advantage of a bar code reader app available at Apple’s App Store. Bar codes placed next to works of art in the museum link iPhone owners to multimedia about the pieces.

The Minneapolis Institute of Arts developed an interactive  program for its iAfrica exhibition for smartphone owners. They can download to their device pictures of the art and other exhibits, and an interactive audio feature that enables the user to pluck (virtually) and hear the sounds generated by the long metal tongues of a lamellaphone, a sub-Saharan instrument.

“People want to be part of the learning. They want to participate,” said Kaywin Feldman, the museum’s director and president. “We use the technology to help them better understand works in the collection that can seem remote to a 21st-century visitor.”

In February, the Dallas Museum of Art began a multimedia mobile smartphone tour of its Wendy and Emery Reves collection of 19th-century photography and paintings. The content includes pictures, audio interviews and video documentaries and interviews coded for each artwork. The museum strengthened its wireless access, and then made the multimedia content available on its Web site at dallasmuseumofart.mobi/.

“We made a decision to keep total production of the content completely in-house  —  Web, coding, design, editing, music, talent, posting,” said Gail Davitt, the museum’s director of education. “There was a clear sense that we didn’t want to end up dependent on the device of the year, but rather to produce content and then be flexible with how we might use it.”

The Brooklyn Museum of Art photographed much of its collection and put it online in March 2009 with a software application that invited people to share the content. Four months later, Adam Shackelford, the chief technical officer of Iconoclash Media, a Brooklyn-based Web site and iPhone app company, introduced Brooklyn Museum Mobile Collection as a free app in the iPhone store. Patrons can now tour the collection with their phone whether they visit or not.

The Indianapolis Museum of Art produced a multimedia iPod Touch tour of its “Sacred Spain: Art and Belief in the Spanish World” exhibition, which began in October and ended in January. The production included audio interviews and video documentaries along with period music and pictures. Each feature was number-coded to pieces in the exhibition. Visitors to the museum paid $5 to rent the devices.

“We are helping visitors learn the story behind the content. We are telling things that are interesting,” said Robert Stein, a computer scientist who serves as the museum’s chief information officer. “Some of what we are doing with mobile device also is betting on where things are going.”

One of the most interesting mobile multimedia features at the San Francisco Museum of Modern Art describes in detail René Magritte’s “Les Valeurs Personnelles,” the artist’s  1952 painting of oversized male toiletries. The feature includes an interactive display of the painting; touching the comb, mirror or shaving dish opens a window for more video, text or audio content that explains the context and importance of the object.

Ramon and Julia Rios, residents of San Diego who were visiting the museum, handed their driver’s licenses to the information desk and were handed back iPod Touches. “I saw people coming over to get the devices,” said Mr. Rios. “I thought, O.K., I’d like to try it. Let’s see what it’s like.”

Later, on the second floor of the museum, Mrs. Rios was asked about the multimedia tour. “I like it. There’s a lot here,” she said, holding up the device. “It’s easy to use and very informative. You have so much more information with this.”