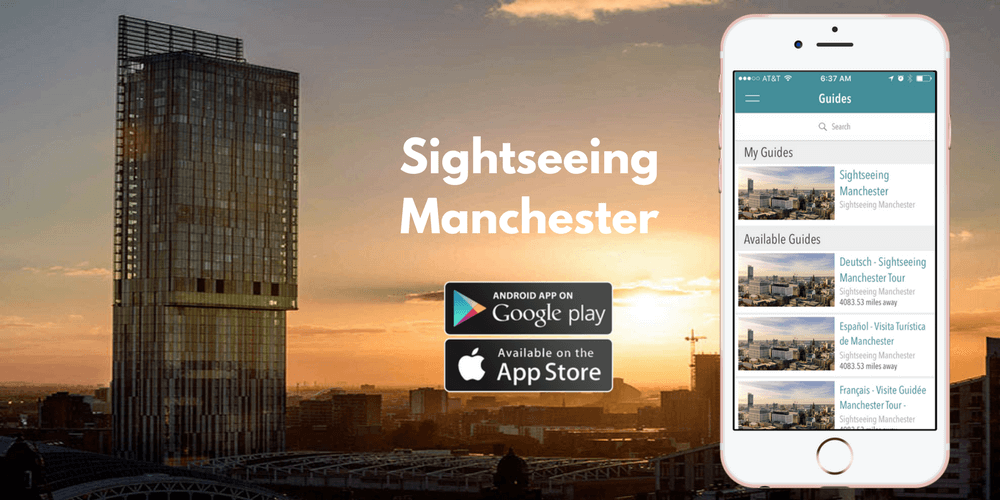 Sightseeing Manchester launched a year round hop-on-hop-off trolley tour of the iconic city of Manchester, England this year.  They wanted to offer the tour in several foreign languages as well as English.  The Tour Buddy App Builder Platform allowed them to create and launch an app that includes the entire trolley tour in English, French, Spanish, Arabic, German and Chinese.   Learn about how Sightseeing Manchester’s new trolley service and foreign language app tour are engaging locals and tourists in Manchester, England.

About the Bus Tour

Sightseeing Manchester has carefully planned 23 hop-on hop-off stops, so that visitors can choose how much time to spend at each stop.   Visitors can view this timetable to catch the next bus to the next stop.  Some of Manchester’s key sights included are Town Hall Manchester, National Football Museum, Museum of Science and Industry and Manchester United Football Club.  The English commentary on the bus tour is Dominic Monaghan, actor from Lord of the Rings and Lost.

About the Foreign Language App

Manchester is a hot spot for tourists from all over the world.  Sightseeing Manchester wanted each of their visitors to experience this exceptional tour in their own language.  Tour Buddy had the perfect app platform to make this possible for them.  With features like the GPS enabled map, offline audio, hands free GPS triggers and the ability to make automatic changes to the app, the Sightseeing Manchester App has helped visitors gets the information they want to know on their own language on their own smartphone or tablet. The languages in the app include German, Spanish, French, Arabic, and Chinese.   Download the iOS or Android at the App Store and Google Play.

You don’t want to miss this! Follow link to purchase your bus ticket.

Contact Tour Buddy to learn how you can make a Multi-Language App Tour.